These are my .32 rim fire pistols
top is a antique bacon single shot
the middle one is a antique Sharps & Hankins 4 barrel pistol
the other 2 are antique 4 barrel Remington Elliots 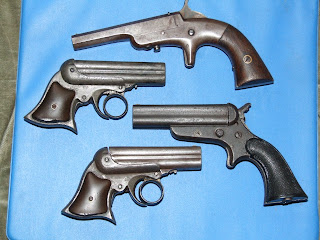 This is how i reload 32 rimfire ammo(.32 rimfire is basically a rimfire version of .32 colt.)

When i saw the re loadable 32 rimfire cases that Dixie Arms sells with the offset blank i thought
there must be a better way.When i saw the  27 Cal Ramset Powder Charge blanks at home depot i knew i found it.The "Green" has about 2.3 grs of powder, "Brown" has about 1.7 grs.i use the green.
the Hilti, Remington,and other brands should also work 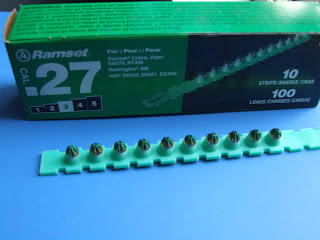 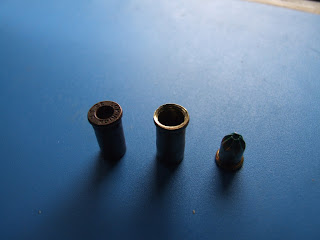 -or a 32 colt heeled bullet 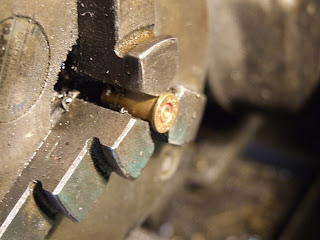 Drill a two step hole into the base of the 32 Short Colt Brass - a 17/64" all the way through the bottom, then a shallow 21/64 in the base, deep enough that the .322 base Ramset charge sits flush.
I used a lathe only because i have one i could of used my drill press with a jig to hold another drill chuck
facing upwards.I have found that i don't need to worry about crushing the brass case as long as i clamp it
close to the rim. 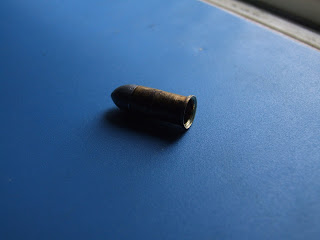 The best part of this setup is that the Ramset is both the primer and the powder charge, and you don't have to line up the round to align with the firing pin like you do with the dixie cases. The powder seems to be like Bullseye in Burn Rate (fast)  "Green" contains a  mild charge for a 48 gr Round Ball. Brown or white 27 Cal charges are harder to find, and are needed  if you go heavier than the 48 gr Round Ball.if using a long colt heeled bullet. 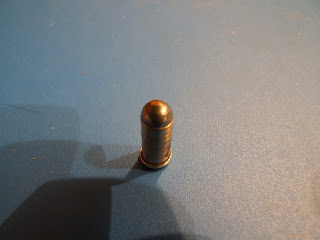 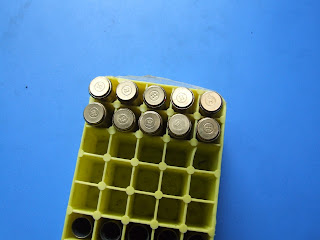 i de-prime using a metal rod and a small hammer. 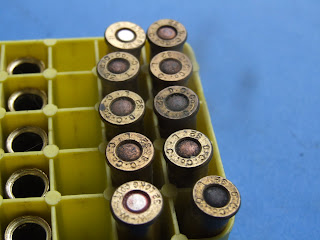 I couldn't find any new .32 long colt brass so  I started with some vintage 32 long colt rounds i used a bullet puller to remove the lead bullet then i dumped out the gun powder. after that i fired off the primer in a gun so i could drill them out i tried drilling through the fired primer but it's a lot easier to drill them out with the primer removed. 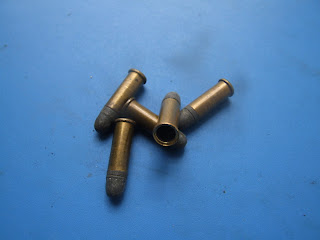 I reloaded the heeled lead bullet with a set of 32 colt dies. before putting in the powder or hilti cap on
of course. 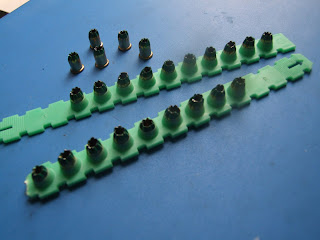 I opened the .27 cal. caps and dumped out the gunpowder because these will be used with black powder
i glued the caps in using a loktite type glue to help make a seal.i have found that the blanks make no noise at all when fired after the powder is removed just a small amount of smoke so they can be tested indoors.
White(gray) hilti caps would not need to be emptied out because they are light loads but there hard to find ebay would probably be the only place to find some. 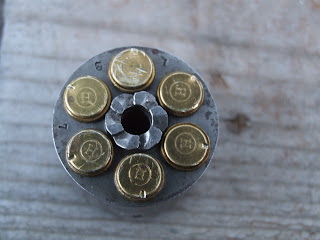 As you can see here the reloads all fired properly in my revolver. but i have found that the brass cap is harder
than a original copper rimfire case so the gun has to have a strong mainspring to fire it. i had to replace the mainspring in my sharps pistol before it would work it worked fine on the old 32 rf rounds. 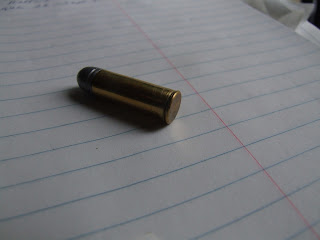 I tried completely removing the base of the brass case above it works best in the pepperbox below
I am having problems with indexing in some guns (revolvers work best)i also tried using a thin brass washer between the brass case and the blank trimming the rim down instead(below)works also. 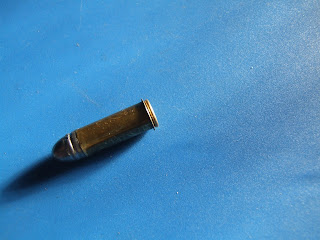 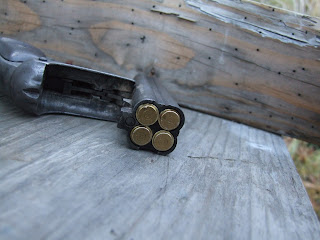 This is my newest antique gun a 32 rimfire red jacket pistol made by lee arms. 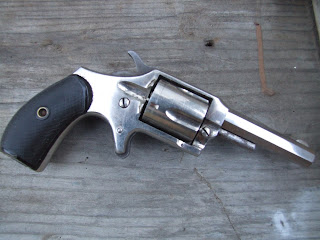 home depot has the lower powered brown .22 nail gun blanks but i haven't tested them yet I'm .22 using acorn blanks from a small blank gun. 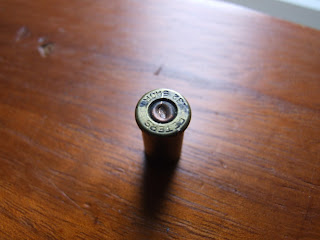 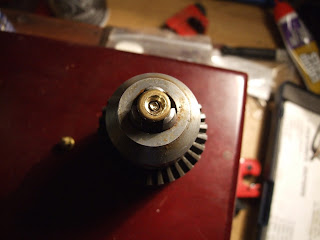 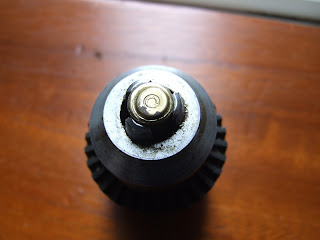 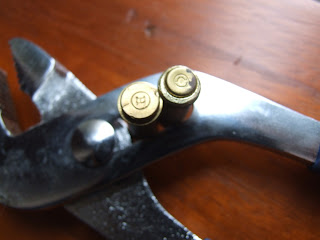 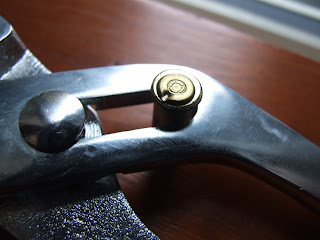 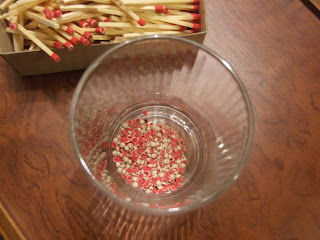 I removed only the white tips from strike anywhere matches the red part of the match heads i threw away
at first i used a razor blade to cut them off but found that it kept igniting the matches.
so i tried a set of small wire cutters to slowly snip them off and i found the matches didn't ignite nearly as often. this was all i got from 250 matches. 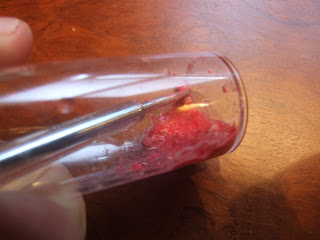 Here is the match paste i made from the white tips of the matches the red color is just from the little bit of red that was left on the white tips.
I mixed water with the match tips and let it soak for about 5 minutes until they softened up and then i mashed them up together to make a paste 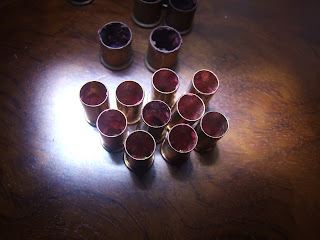 Here is the match paste in the once fired 32 rimfire cases i cleaned out the bases of the fired rimfire cases with a dental pick then pushed the match paste into the base with a small screwdriver then let it dry overnight
( i could have used acetone instead of water it would only need to dry for about a hour)
then filled the case with black powder then the bullet,at first i tried to spin the cases in a drill thinking it would spin the match paste into the rims but it just moved up to the top of the brass case and went over the top and made a mess.
I didn't bother to remove the dent where the firing pin hit the rim the first time it was fired i will just make sure the dented area is facing another direction when i fire the round. 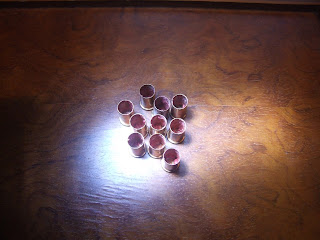 The match tips ignited so easily when i removed them from the match heads that i believe it would be way too dangerous to try and reload them with a set of dies i believe the downward force on the rim could ignite the primer compound and fire a round in my reloading press. so i made a bullet crimper tool from a wire crimper. using a .31 caliber round ball pushed in on top of the black powder is probably a safer way to do it.


This is a comment sent to me from a anonymous sender that i will try.

You can use .32 S&W LONG to make these cartridges as well. You NEED a .32 Colt Sizing die LUBED. Force the .32 S&W into the .32 Colt sizing die and it will continue up to a certain point where the case wall gets too thick. About 2-3mm away from the rim. Get a file and a hand drill to remove this high point on the case wall. Then resize it to the rim by putting a piece of metal over the shell holder. It may not go all the way so u may need to file it a bit more of the high point until you can size it and there u have it. You made a .32 Long Colt case from a .32 S&W long case. .32 S&W is a lot easier to find than .32 Colt.

.32 acp. and .32 new police should work also,the 2 below are 32 S&w long and short that i resized using
the instructions above. 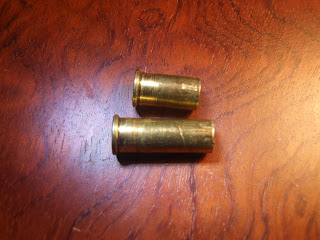 I found some 32 s&w shorts and resized them the 3 top left are 32acp.that i also tried they also worked good but the length would need to be trimmed if they were used as 32 short rf. the length are somewhere between 32 shorts and longs so they could be used as a reduced load 32 long. 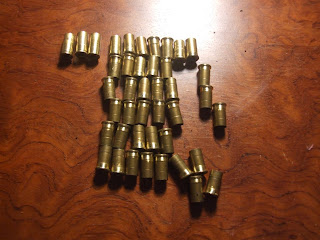 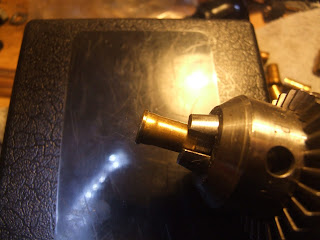 The picture below shows the brass after being run through the dies the area below (#2)still needs to be removed with a file one thing that concerns me a bit is the area marked #1 with the arrow because it could leave a thin area of the brass that could cause a case separation if too much brass is removed.
i used a file that was wider than the area that needed to be filed off so i could see if i was removing
too much brass. 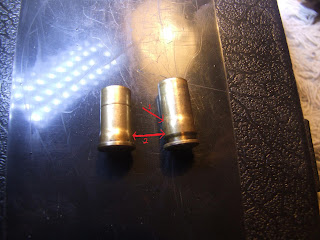 Lyman made the following 32 colt molds but are almost impossible to find anymore.
299-152  80 gr RN Heel 32 Short Colt Heel Base

buffalo arms currently has a 32 colt mold at $135.00 and i believe NEI also makes a 32 colt mold.
old west bullet moulds has the best price of the three  http://www.oldwestbulletmoulds.com/

32 colt dies and brass can also be a challenge to find.
.320 cf European brass can also be used it has a thinner rim than the 32 colt but is otherwise the same.
They also made a .320 rimfire seen below this is a loaded round that misfired and was struck several times 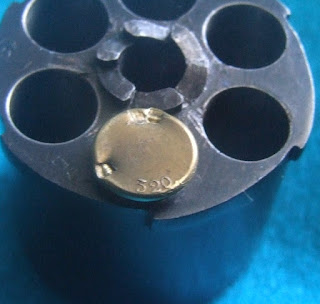 CAUTION: The information and data contained on the reloading pages is for informational purposes only. Cross-referencing the posted reloading data information for its' accuracy & safety (before use) is everyone's own responsibility.

The end user is solely responsible for EVERYTHING that may occur using this data.


I advise you to NOT use my findings. I accept no responsibility for what you do.
Posted by mr.b at 10:02 AM 4 comments:

My other rimfire reloading blogs